The people of Chettinad are known for their food and hospitality.  Chettinad cuisine is considered to be dating back to the 14th and 15th centuries. As in most of South India, Chettiars were vegetarians traditionally. Chettiars travelled globally for business purposes, to Burma, Malaysia, Sri Lanka, and all the way to Cambodia. They came back with flavors from these distant lands. and they picked up meat in their cuisine. One of the spiciest and the most aromatic in India, the Chettinad cuisine offers a variety of vegetarian and non-vegetarian dishes. Some of the popular vegetarian dishes include idiyappam, paniyaram, vellai paniyaram, karuppatti paniyaram, paal paniyaram, kuzhi paniyaram, kozhakattai, masala paniyaram, adikoozh, kandharappam, seeyam, masala seeyam, kavuni arisi & athirasam. 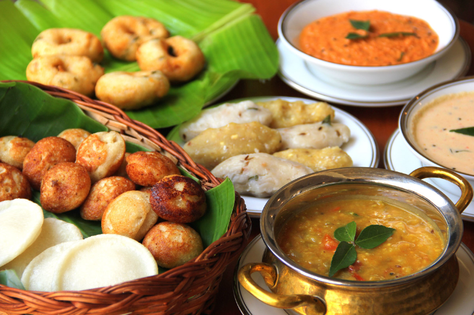 "In the 19th century and until the Second World War, Chettinad was a wealthy area in Tamil Nadu. The patriarchs were money-lenders who traveled all over Southeast Asia, returning with spices. They created unique blends, called podis, which add incredible depth to their rich soups, called sambars."
- Jill Donenfeld, co-author of The Bangala Table: Flavors and Recipes from the Chettinad

"Chettinad cooking has always been distinctive and has recently become popular not only in India but also in many other parts of the world. Chettinad cuisine is characterized by thick delicious sauces called kulambu and irresistible vegetarian and non-vegetarian stir-fried dishes called poriyal. Chettinad cuisine is also known for a wide variety of unique savouries and sweets called palakaram usually served at breakfast, teatime or as a light meal in the evening"
- Alamelu Vairavan, author of  Chettinad Kitchen:  Food and Flavours from South India

Veggie Belly - a good looking blog by Sala on vegeterian recipes..everything from easy to exotic...search for "chettinad" on this blog to find some great Chettinad recipes...

Email us recipes and videos to add here