Chettinad comprises of a network of 73 villages and 2 towns forming clusters spread over a territory of 1,550 sq.km in the Districts of Sivagangai and Pudukottai in the State of Tamil Nadu, in Southern India.

The Nattukottai Chettiars (aka Nagarathars) belong to a lineage of wealthy traders and financiers who made their fortunes by extending their business to the whole of Southeast Asia, particularly during the second half of 19th and early 20th century when they were at the peak of their economic power. Vital component in the south Indian economy, the Nattukottai Chettiars represented the major banking Hindu community of South India. Their vast influence and richness allowed the community to build a dense network of 96 villages among which 73 remain, according to the Maniyadi Sastram texts, the traditional planning and lifecycle precincts.

All the Chettiar settlements possess outstanding physical characteristics of urban and land-use planning with their South-North/East-West grid pattern, including water system, and the development of palatial architecture which depict a unique cultural interchange of cultures with influences from all over the world and the combination of the vibrant Tamil traditions. These settlements and the architecture, built from 1850’s to 1940’s, are directly associated with the rich living heritage specific to the Chettiar community. 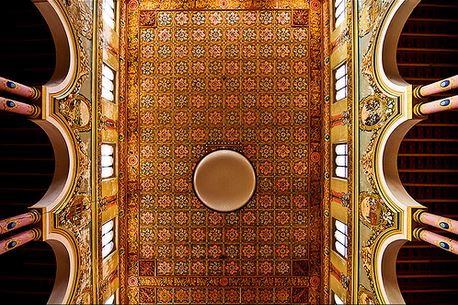 Chettinad possesses some outstanding physical characteristics of urban and rural planning which create a unique architectural ensemble with thousands of palatial houses.  This ensemble reflects the way the Hindu Tamil community of Chettiars lived. As the result of their travels, they have integrated multiple influences into the Tamil traditions. This blend represents the uniqueness of Chettinad.

They had a vision of land-use planning which has connected the different urban to landscape elements, particularly for rainwater harvesting and storage system. The architectural features of the houses comprised of series of courtyards organized along a longitudinal axis as well as the use of material is taking into consideration the semi-arid and hot climate.

Chettinad architecture is also closely linked to the lifecycle rituals of the Chettiar community. The mansions were conceived to perform the different functions, rituals and family celebrations during the course of life from birth to death.  In addition to the lifecycle rituals, the temple and village festivals are part of the Chettiar culture forming a large set of rituals all over the Tamil year.

In order to construct and decorate these mansions, materials and expertise were brought from all over the world, which added to the cultural glory of Chettinad. For examples, teak wood was imported from Burma, satin wood from Ceylon, marble from Italy and Belgium, cast iron and steel from UK and India, ceiling in metal plates from Great Britain, tiles from Bombay, Japan, Germany, France and England, chandeliers from Belgium, France and Italy. As they required the best, they also brought skills from different regions of India such as woodcarving, frescoes and egg-plastering.

The Chettinad villages are organized following north-south axes, along which are created the longitudinal east-west orientated plots. Following this configuration the houses are built around an east/west central courtyard which provides shade, light, coolness and air.


The Chettiars have undertaken important earth-work in order to manage the rain water harvesting. They have developed and enhanced on a large scale over the territory, the traditional Tamil techniques of water management.